Home Central America & Mexico Living in Utila, Honduras – What’s it like? My Month On The... 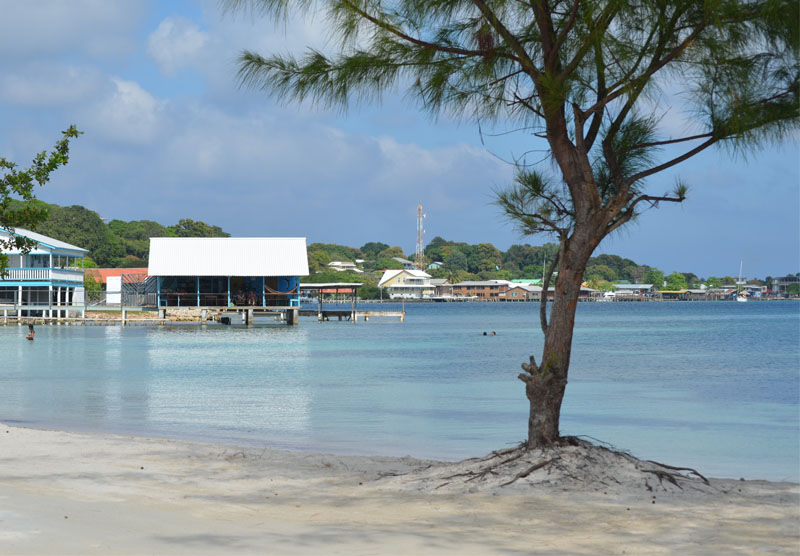 Utila is a diving and party mecca. A serious diving location during the day, while at night the island is transformed into a party hot spot.

While Utila is synonymous for its nightlife and diving, there are other things to discover on the island. Read on as I share some of the secrets I came across in my month of living in Utila.

More articles on the Honduras: 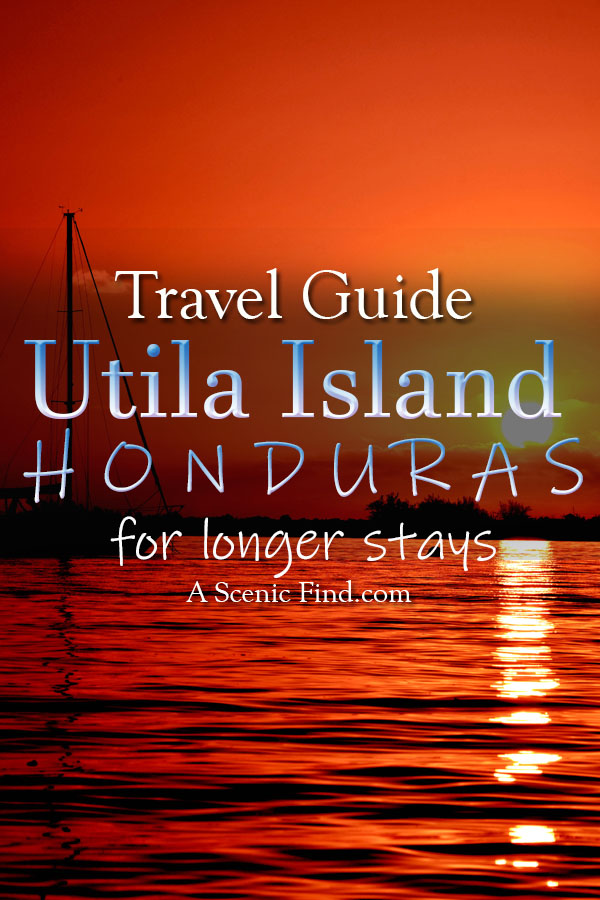 How To Get To Utila, Honduras 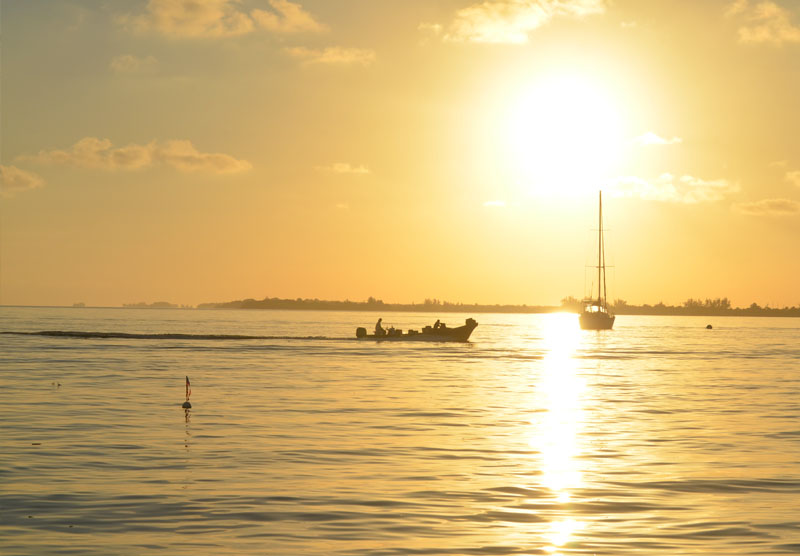 Utila is an island just off the just off coast of Honduras, with the closest mainland city being La Ceiba. To reach this islad which synonymous for it’s cheap diving and nightlife you will need to catch a ferry from La Ceiba to Utila for around $750 Limperas (or $32 US), with the boat ride taking 1 hour.

I made the journey to La Ceiba via a shuttle from Livingston in Guatemala, with the shuttle passing through San Pedro Sula.

If you’d like to know how to get to Utila from Nicaragua or Vice Versa, please follow my guide which can be found here. 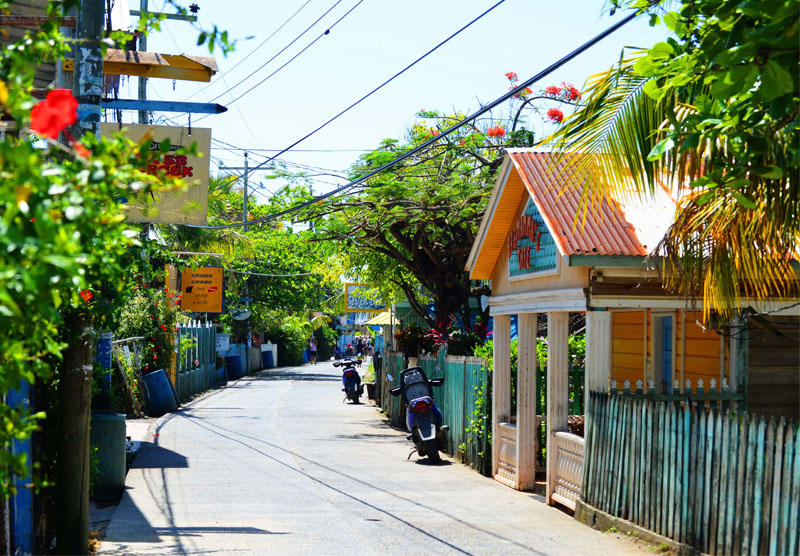 Housing is very cheap, but there are no traditional hotel chains in Utila. The places which offer accommodation are either in the style of Air B&B, or laid out like a traditional hostel room but these are rented from the dive shop.

If going with the latter, it should be noted that most dive shops offer free accommodation for the duration of you completing a PADI course (open water or advanced).

I arrived on the island with no accommodation booked. I preferred doing it this way since I could shop around a little. I’d recommend booking ahead if possible since some of the hotels can sell out pretty quickly since there is only limited space on the island.

If you do decide to follow in my footsteps, be advised that there is a bit of a mad dash when people arrive on the island from the ferry in the afternoon to find accommodation. Quite a few people who were on the same ferry as me missed out on accommodation completely.

I chose my hotel and spoke to the landlord about staying for one month. I ended up living in a studio apartment in Utila for $250 a month ($8.30 USD a night) which was fully furnished with microwave and fridge, internet included, however electricity was extra.

The cost of electricity ended up being around $30 USD. For $320 a month, a 1 bedroom apartment with a lounge room and kitchen was available. Since Utila is a bit of a social place, this wouldn’t be such a bad option for entertaining and having parties on the island. 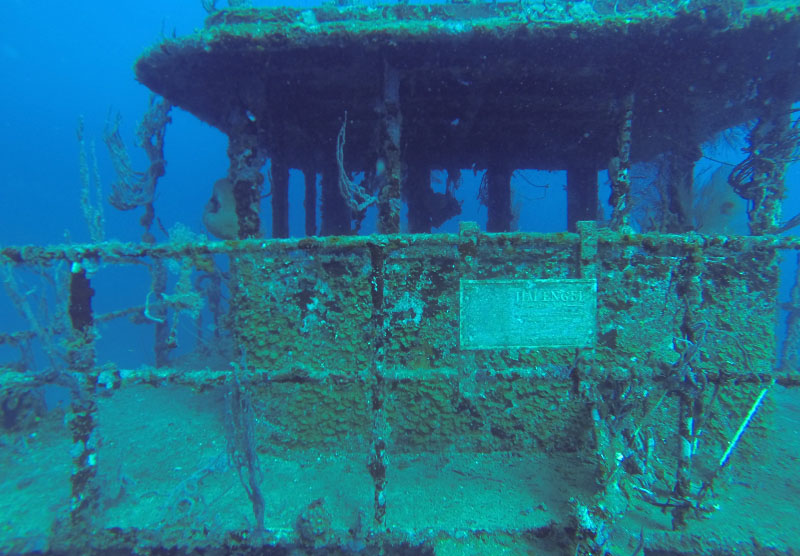 This is the main reason why people come to Utila, all for the diving and the potential chance of seeing a whale shark. The diving in Central America is already rather cheap compared to prices in Western countries, however Honduras just happens to the cheapest for diving out of all of Central America.

Due to this the island attracts quite a few people who are wanting to become certified divers, upgrade their certification, or become a diving instructor or dive master.

Utila is surrounded by amazing coral and marine life, with Utila being the only place in the world you can see whale sharks all year round. However whale sharks are more common towards the end of February, to March and April, and then again though in lesser amounts, around October, November and December.

During my time on the island I upgraded my qualification and became and ‘advanced diver’ for $275 US. The course can run for 3 – 5 days, with many dive centers offering free accommodation if doing a course.

From my knowledge this was only valid for those completing an Open Water and Advanced, not for those wanting to become a Dive Instructor or Master.

Other underwater sights to see are sea creatures such as tropical fish, turtles, whale sharks, and eels. While if none of that tickles your fancy just off the coast there is a wreck dive available called the ‘Helliburton’.

The Helliburton was purposely sunk to attract tourism to the area and help improve the marine ecosystem. Unfortunately you will need to be an advanced diver who is specialized in penetrating ship wrecks to be able to enter parts of the sunken ship.

Otherwise you’re only allowed to swim around the ship, which is still an amazing sight to see.

Things To Do In Utila, Honduras 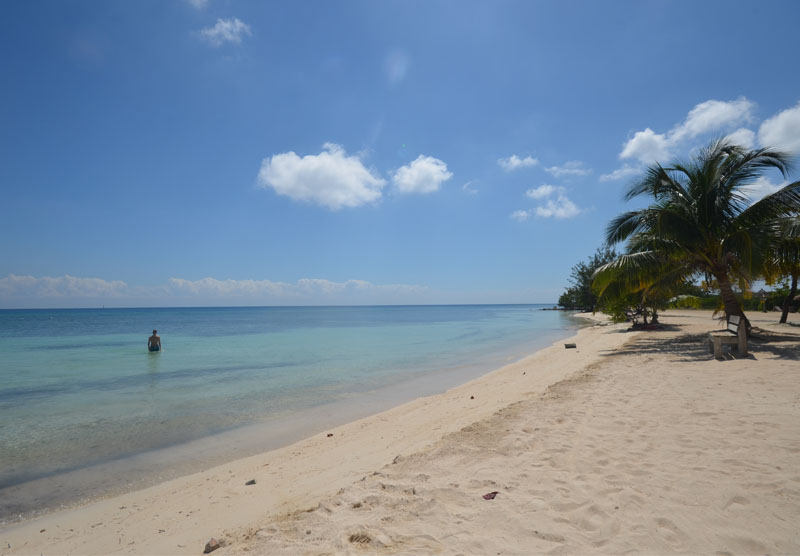 Utila is a small island, with it being possible to explore and do everything in 1 day. Having said that time seems to slow down on Utila, as you adjust to the lifestyle of slow island living.

The main draw card of Utila is the peaceful and relaxed vibe which feels far removed from a busy city. Utila is more of a place to unwind and have some fun on the beach.

Though if you happen to find that you’re getting slightly bored there are several things to do in Utila. The first is the most obvious and that is to relax on the sand or swim in the warm tropical waters at one of the many beaches lining the island.

The beaches on the island are phenomenal. One of the great things about Utila since it is an island, is that if you happen to find a particular part of the beach a little too crowded you can always move elsewhere on the island.

The coastline of the island is predominately sand. So there are plenty of opportunities to relax and soak in the Caribbean vibes. 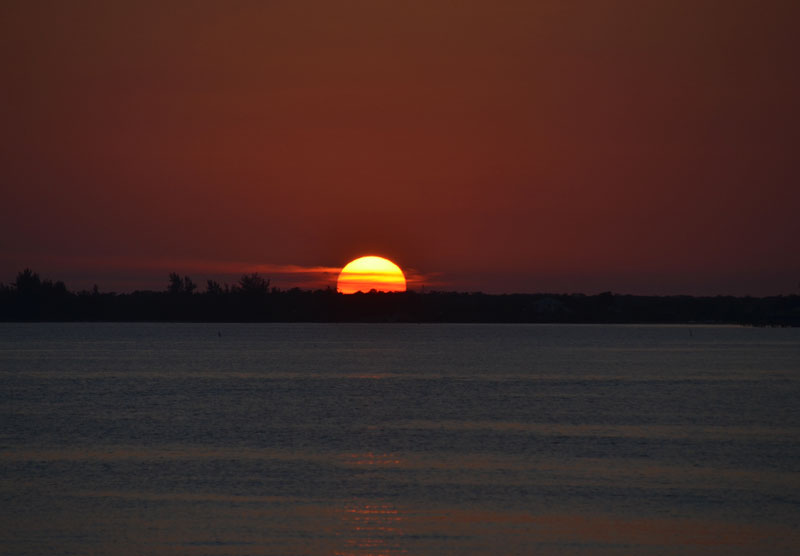 Utila is only really famous for two things, and that’s the cost of diving, and partying. Usually the two combine for a hilarious mix, with the “snorkel test” which is given to graduating instructors.

There is an unwritten rule on the island that after completing all the theory and practical work to be a dive instructor,  that you’re truly not one until you’ve passed a snorkel test.

This  involves you sitting in front 70 -150 people from the dive centre, with the main instructor divulging a secret about you, and you having to quickly drink several alcoholic drinks as they are poured directly into a snorkel.

Even though Utila is a small island there are several bars on the island, Rehab, Tree-tanic, and Skidrow. With the latter being the most infamous of the bars with this mostly due to it having a t-shirt/singlet challenge.

When you arrive in Utila you will notice that EVERYONE is wearing a Skidrow singlets which you can only come into possession properly via a drinking challenge. The challenge is to drink 4 shots of a “special” Utilian brew, which is really just spiced rum.

Transport For Getting Around Utila 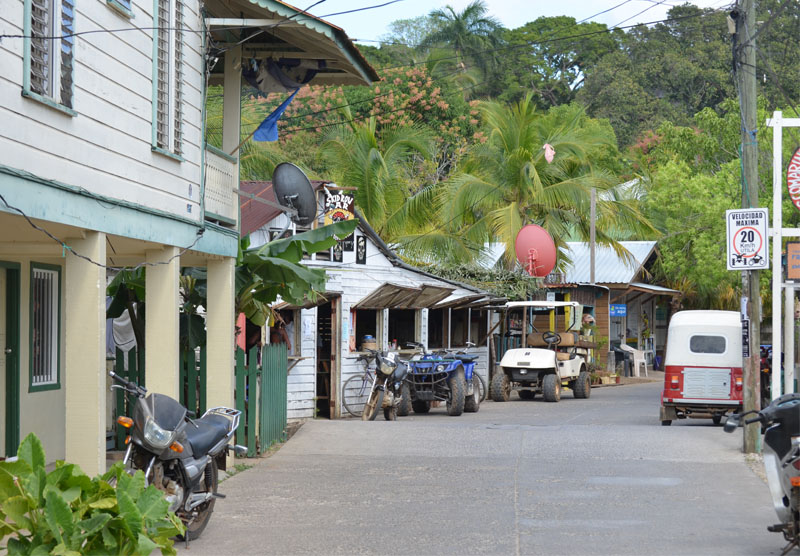 For transport you have several options. You can walk, use a bicycle, a golf buggy, 4×4, or a motorcycle.  There are cars on the island but they really aren’t a popular choice since the streets are quite narrow and bumpy.

The most common method of transportation is via golf buggy. If you’re planning to explore the island, or simply relax in Utila for several days I’d strongly recommend doing it in style and either renting a golf buggy, 4×4, or a motorcycle.

The conditions for renting a vehicle are like they are in the rest of Central America, very loose. As long as you know how to drive, or even not that well in our case, they really don’t care too much on who rents the vehicle as long as it’s returned in one piece.

The golf buggy and motorcycle are around $45 US to rent a day. Though if you’re on a tighter budget you can rent a bicycle for only $5US a day. 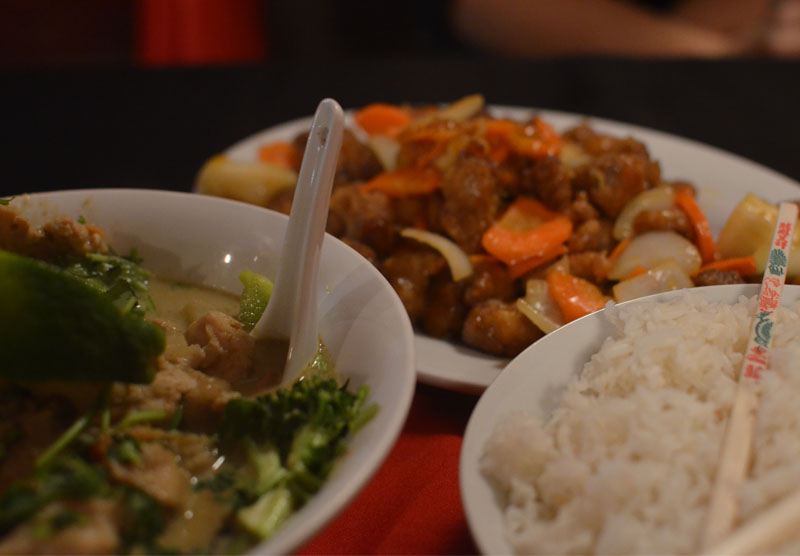 The food is very Central American-ish. A lot of rice and bean dishes served with chicken or fish. Since Utila is an island, fish is quite popular on the island. Otherwise if you’re after something which reminds you a little more of home there is pizza, hamburgers, steak, and even Thai to be found on the island.

The food on Utila is quite Western, so the culture shock will be quite small. If you’re after something which is particularly Western chances are it’ll be available to be purchased cooked already. Or at the very least you should be able to purchase the ingredients to make what you’re after from one of the small shops on the island.

Safety of Living in Utila, Honduras

San Pedro Sula the town you have to pass through to reach La Ceiba, and finally Hondurad is notorious for having the highest murder rate in the world. Due to this quite a few persons are reluctant to travel anywhere in Honduras , even Utila (which is normal).

All shuttle buses pass through San Pedro Sula during the day, it’s only at night when things may become a little more dangerous. It should also be noted the crime in San Pedro Sula is mostly gang related, as long as you don’t associate with a gang you should be okay.

With that said, Utila feels like it’s own unique country which has sought independence from Honduras and isn’t plagued by the issues which face the rest of Honduras. Utila is very safe, with it having a very beach side/small town vibe to it.

I wouldn’t recommend somewhere to travel if I believed it was unsafe and put you in undue risk. So when you’re stumbling from the infamous Tree Tanic or Skid Row pubs at night back to your hostel, you could quite easily lay out on the beach and watch the stars pass you by without fear of anything happening. Utila is that safe.

If you’d like a perspective as to how dangerous Central America is please read my article on that very topic. 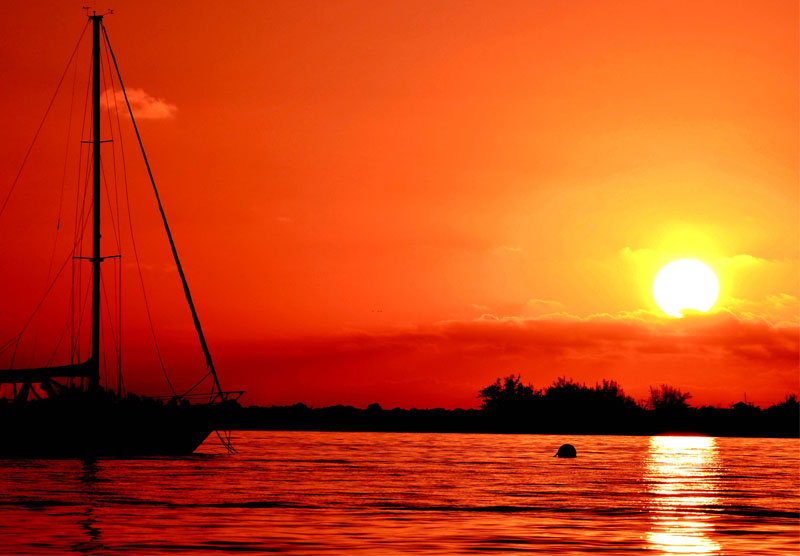 Overall I was quite happy to stay in Utila for a month to relax a little, and I feel as though it was a great decision. The people on the island are rather friendly, with the vibe on the island being that of a Caribbean island.

For some a month may be too long, but I’d definitely recommend at least a few days to chill on the island and take in the good atmosphere.

Living in Utila, Honduras – What’s it like? Our Month On The Island 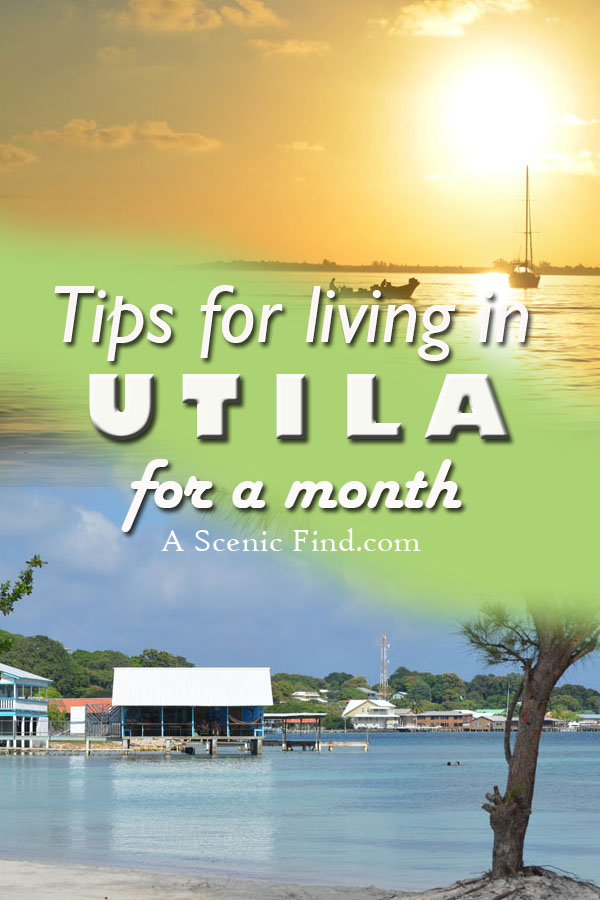 Volcan Paricutin: You’re Hiking In What?

Best Things To Do In Guadalajara, Mexico