Deciding where to stay in Ljubljana doesn’t need to be a tricky task as with cheaper hotel prices than the rest of Western Europe. I chose the Grand Hotel Union in Ljubljana due to it’s closeness to the bus and train station, value worthy price and spacious rooms.

For more videos on Slovenia watch my Slovenia playlist here. You can read more about where to stay in Ljubljana and our time at the Grand Hotel Union below.

| Where To Stay In Ljubljana| 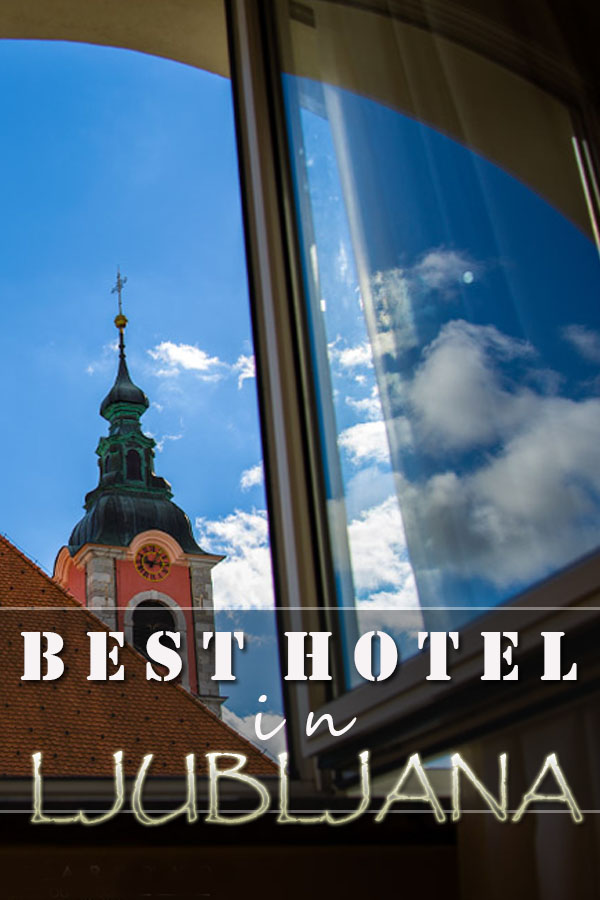 After arriving at the hotel I was delighted to be greeted with a room much larger than expected. For about 160 euros / USD175, the Deluxe Double room was one of the biggest rooms I stayed in for the entire trip.

Upon first entering there was ample closet space leading up to the sitting room which featured an elegant two person sofa, a welcome basket with fresh fruit, and a working space. Through the door was the large bedroom with an extra large double bed, air conditioning and a flat screen television. 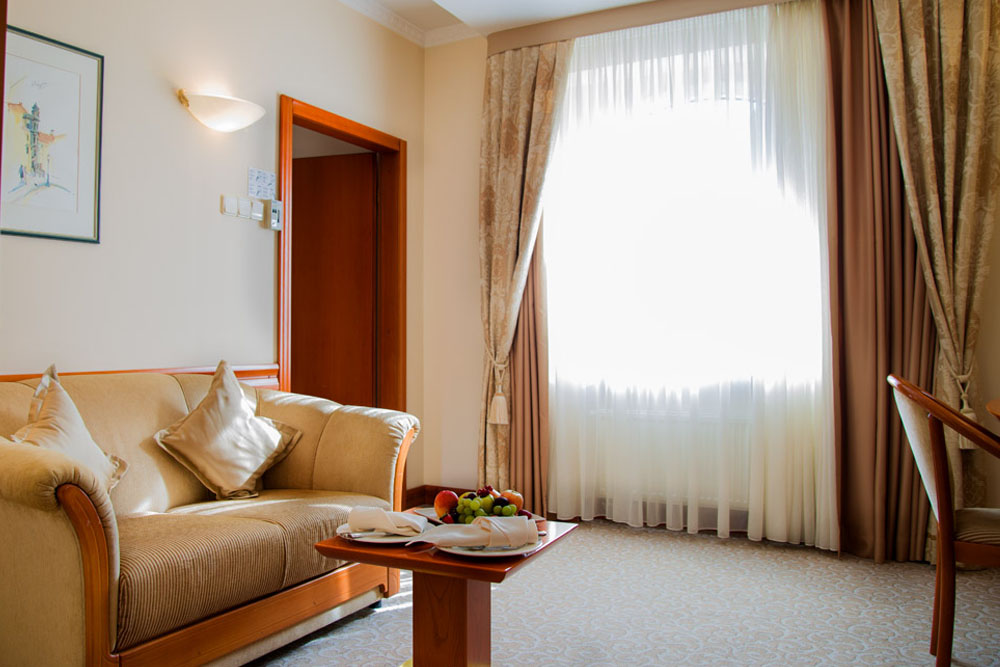 Finally there was the bathroom which contained a ring light style mirror, hair and body products, a bath and all the other usual amenities. 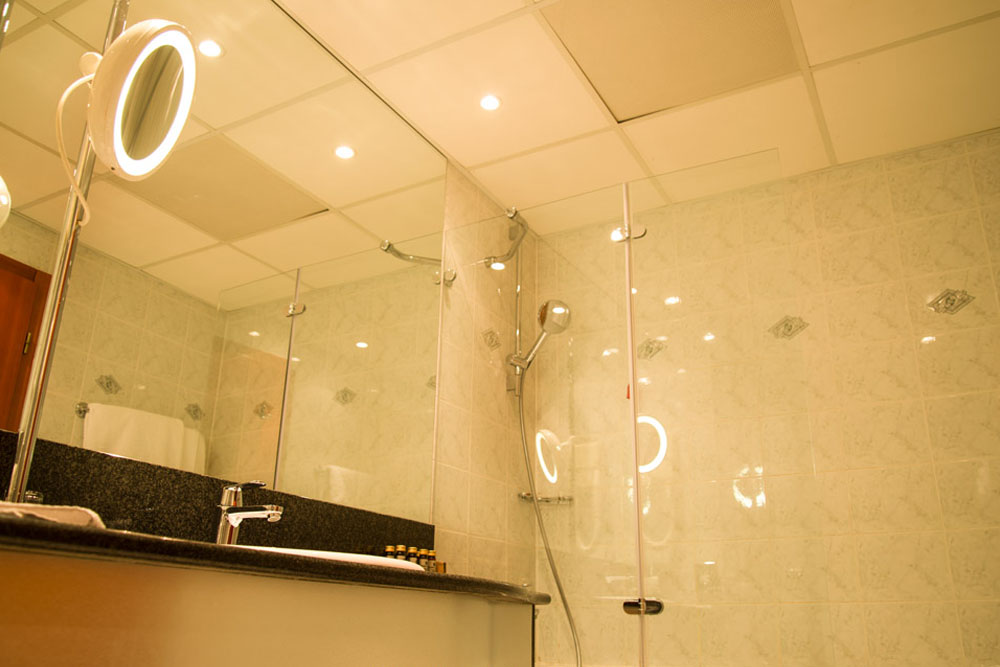 While I was laying down my suitcase I noticed that there were two large windows in our room. Since I hadn’t ventured past the hotel at this point I was surprised to find the lovely view that awaited me. The room, which was at the end of the hall looked out over the town square upon some gorgeous buildings including one that was bright pink. As a traveler who is attracted to scenic destinations this was a big plus in my books. 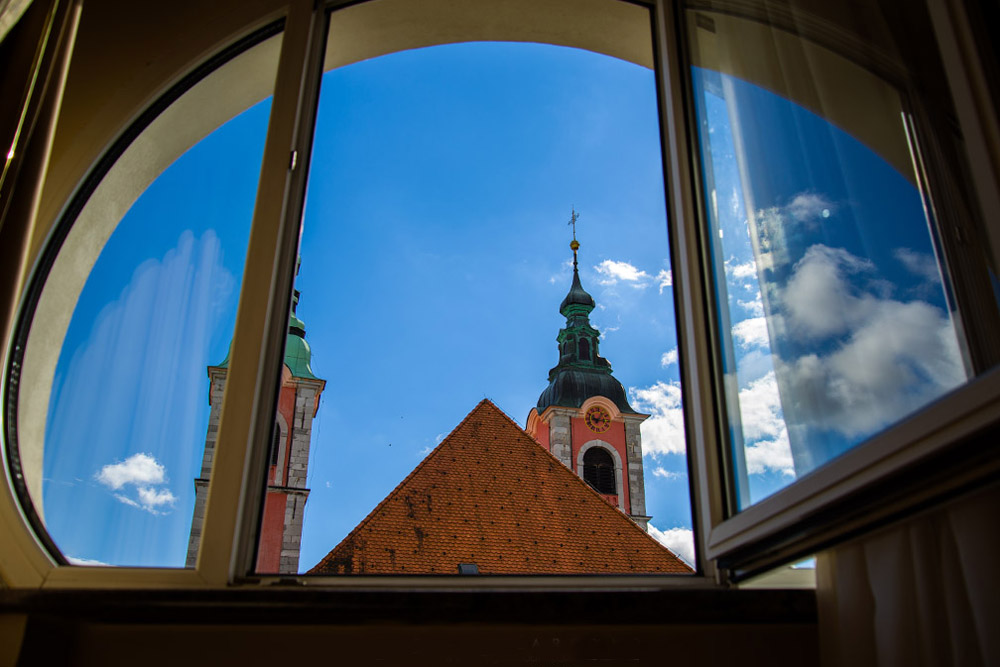 Overall my favourite things about the room were the size and the view – alongside the value. 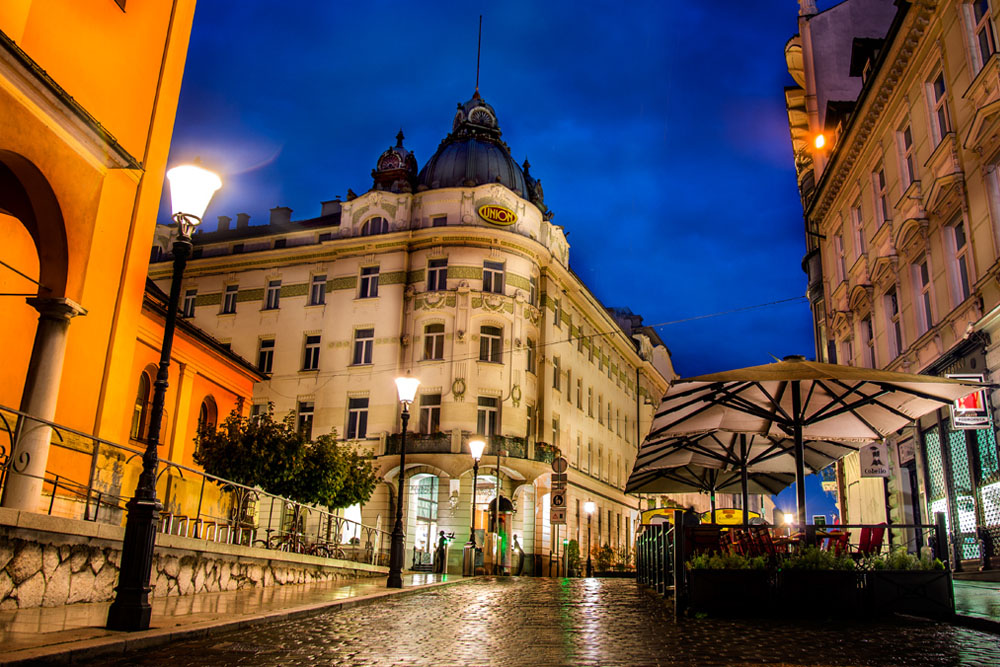 The Grand Hotel Union in Ljubljana has one of the best locations especially for those arriving by train, Go Opti shuttle or by bus. Upon drop off at the bus station I thought I had a ten minute taxi drive ahead of me (thanks Google Maps), but the taxi driver told me it was only a couples of minutes walk down one of the roads opposite the station so I walked there instead. 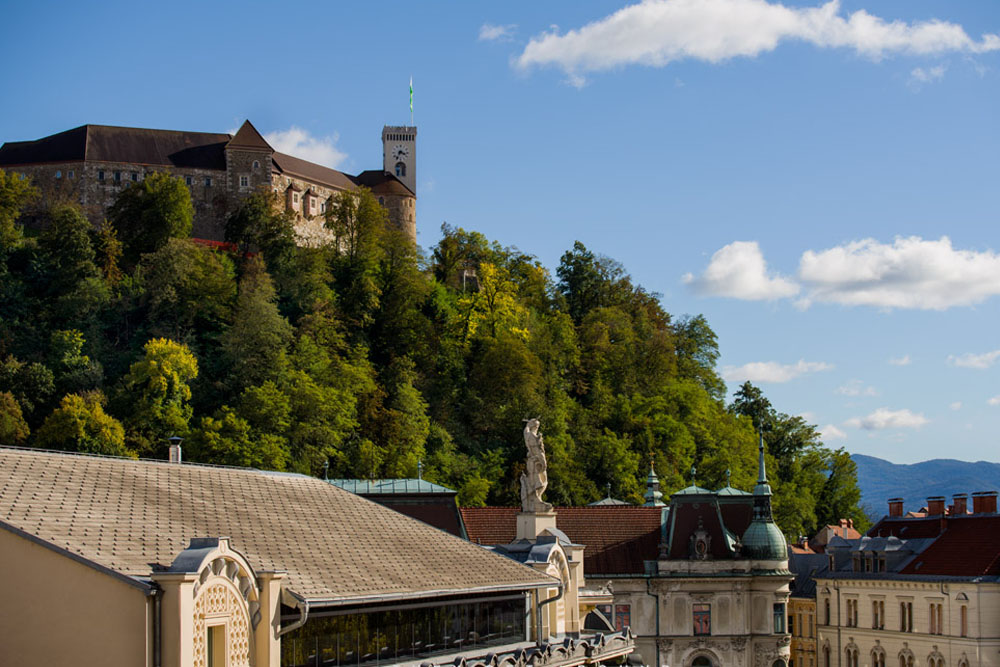 The Grand Hotel Union is conveniently located next to Preseren Square which is very close to the canals, the Castle and some beautiful European architecture.

Nearby there were restaurants to suit as budgets. Firstly there are the facilities run by the hotel including the Grand Union Cafe, the Union Garden Restaurant and Lounge and the Restaurant and bar Atelje, among a few others. 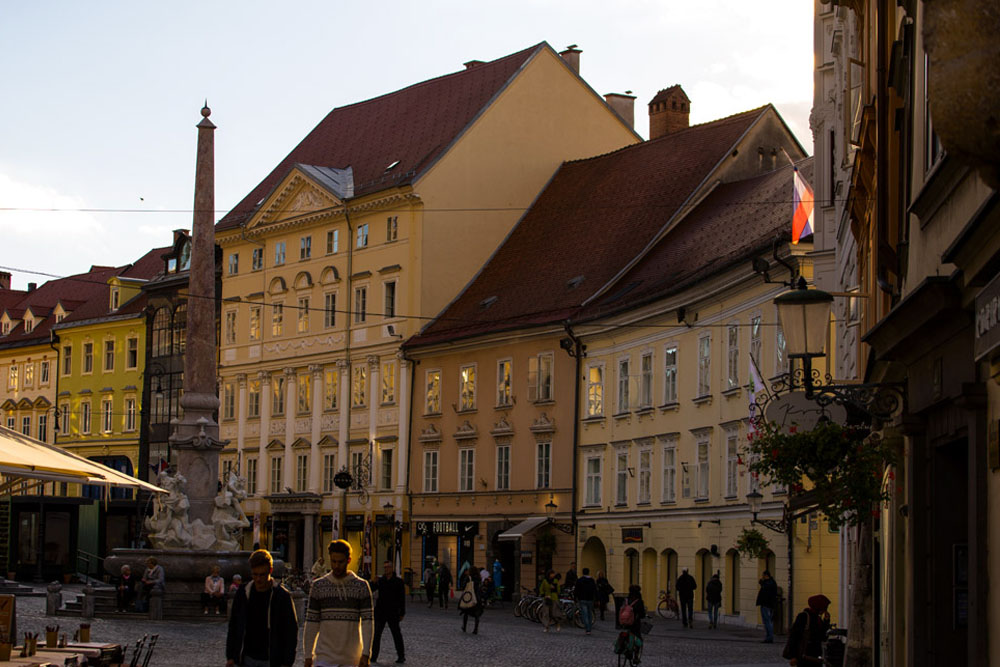 Outside of the hotel you’ll find numerous eateries and bars near the canals, and many cheap eats in the opposite direction near the bus station. 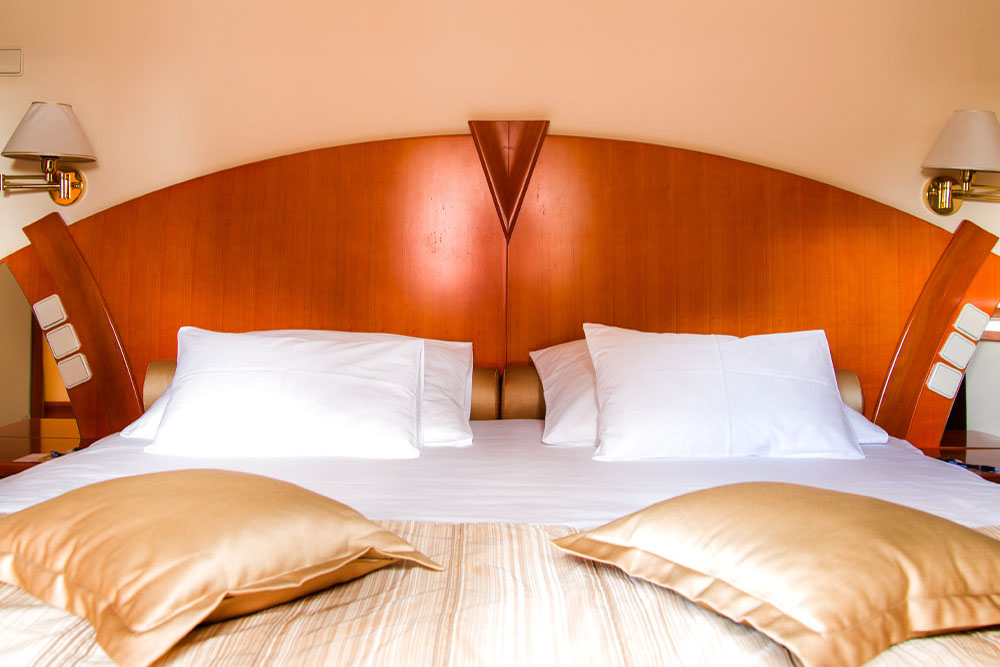 The staff were friendly and professional, which is always a good mix. Also as a bonus, they speak English very, very well, in fact most Slovenians seem to have a good handle on the English language. This made the check in progress easy and I was also able to make use of all of the services the hotel provided.

Speaking of which, my time in Ljubljana marked the first time I had ever used the services available by the concierge. As I was taking a day trip to Lake Bled during the stay, the concierge was not only able to print out the timetables for me, but he also checked the weather and gave me an umbrella as there was a chance of rain. 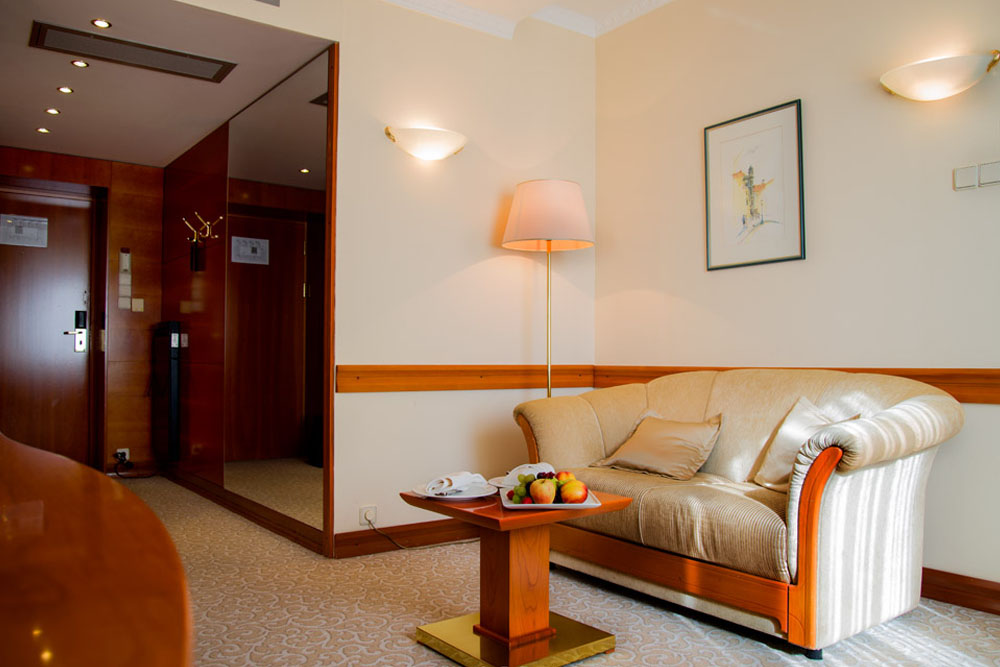 Overall I’d recommend the Grand Hotel Union for affordable luxury in Ljubljana. The hotel is central and depending on which room you choose, you’ll have a range of different views to drool over. 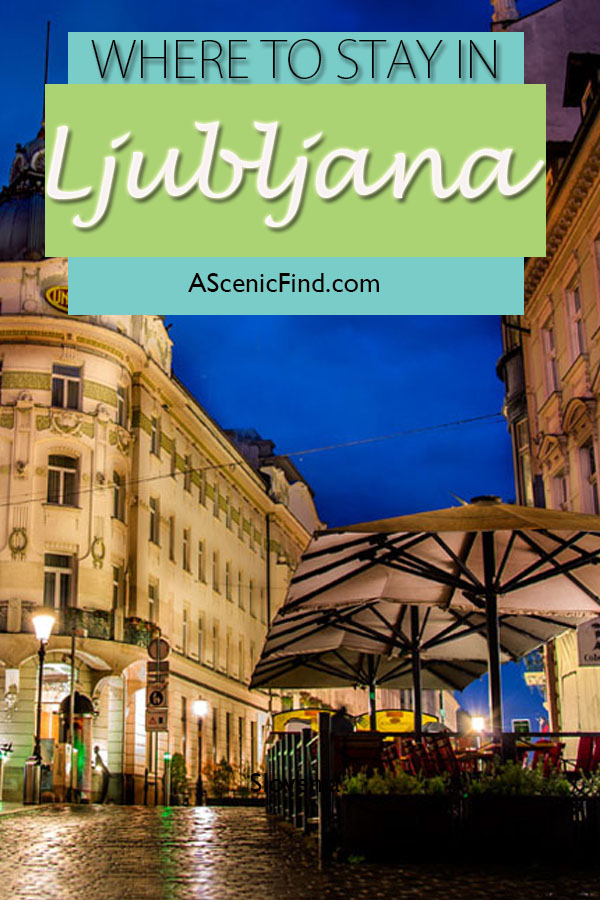 See more of my time in Ljubljana in these two videos:

I was hosted by the Grand Hotel Union Ljubljana in exchange for an honest review, post has been moved over from an old blog.

The Very Best Things to do in Ljubljana, Slovenia

Where to stay in Ljubljana, Slovenia | The BEST Choices

Where To Stay in Bovec, Slovenia: Hotel Sanje Ob Soci

This website uses cookies to improve your experience while you navigate through the website. Out of these, the cookies that are categorized as necessary are stored on your browser as they are essential for the working of basic functionalities of the website. We also use third-party cookies that help us analyze and understand how you use this website. These cookies will be stored in your browser only with your consent. You also have the option to opt-out of these cookies. But opting out of some of these cookies may affect your browsing experience.
Necessary Always Enabled

Any cookies that may not be particularly necessary for the website to function and is used specifically to collect user personal data via analytics, ads, other embedded contents are termed as non-necessary cookies. It is mandatory to procure user consent prior to running these cookies on your website.